Whose Limb Is It Anyway? 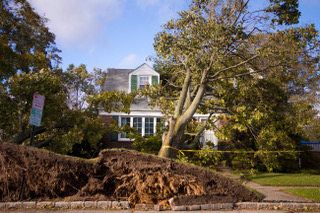 Recently, while driving on 64 West, I saw a storm approaching and pulled over to the side of the road. For the next 10 minutes a huge amount of hail fell. Never before have I experienced my car shaking like that and the noise of the hail was deafening! The following week, we experienced a derecho, knocking down trees and causing power outages throughout the state. Our house lost power for 5 days. With all of the trees and limbs falling, sometimes on our neighbors’ yard, I thought it would be informative to look at Virginia laws on trees and the damage they cause.

There is a Virginia Supreme Court case that address Virginia law as it relates to trees. In Fancher v. Fagella, Mr. Fancher brought a lawsuit against his neighbor because his sweet gum tree had become a nuisance. The tree’s roots had invaded and damaged the retaining wall between their properties. Debris and pavement moved by the roots were blocking Mr. Fancher’s sewer and water lines. Mr. Fancher also had complaints of overhanging tree branches depositing debris onto his roof and rain gutters.

Mr. Fancher attempted to repair the retaining wall as well as the foundation of the house. Additionally, he cut back the overhanging branches, but none of these steps worked as the root system and the branches continued to expand.

Mr. Fancher brought the suit to have his neighbor remove the tree and the root system entirely. At trial, Mr. Fancher presented expert testimony of an arborist who stated that the sweet gum tree would drop gumballs and heavy pollen and had a very invasive root system. He also stated that no amount of concrete would hold the root system back and it would continue to grow and damage the retaining wall.

The Virginia Supreme Court took this opportunity to review the state law. After analyzing a number of rulings other states had instituted in similar cases, The Court decided that encroaching trees are not nuisances simply because they drop debris on adjoining property. However, encroaching trees may be deemed a nuisance when they cause actual harm or impose danger of harm to the neighboring property.

If the tree becomes a danger, a neighbor may be held responsible for the harm caused and removal of encroaching branches or roots. The Virginia Supreme Court confirmed the existing law that an adjoining landowner may cut away any encroaching tree branches on their property, whether or not they constitute a nuisance or cause harm to the property.

The Court was clear to point out that a trial court cannot always grant an injunction simply because trees or limbs are on a neighbor’s property. The trial court must consider whether the existing condition on the adjoining land imposes any reasonable duty on the owner of the tree to protect a neighbor’s land from damage. If there is no duty, then the traditional self-help remedy is adequate.

The Virginia Supreme Court found that the court must determine the extent of the remedy if there is duty on the part of the owner of the tree. The Court will determine if self-help trimming of invading roots and branches would be appropriate or a complete removal of the tree is needed.

In short, if the neighbor has limbs or roots that encroach on your property you may remove them at your own expense (self-help). If that does not resolve the situation, you may ask the court to have them removed. I always recommend that you try to address your concern with your neighbor before taking any legal action to find an amicable solution. As far as the branches that landed in your yard from the neighbors’ tree, you are responsible for removing them at your own expense.

To learn more about State laws and tree removal, contact our office today.