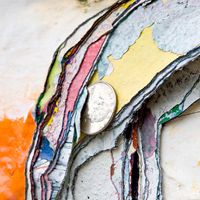 The Hook reports that A University Transit Service bus driver hit the University of Virginia’s historic Beta Bridge on Wednesday morning, resulting in significant damage to the end column as well as a portion of the wall.  Apparently, the driver failed to secure the brakes while performing a cleaning operation.

The University of Virginia’s Beta Bridge is most famous for its use as a canvas for student painted messages.  Layer upon layer of paint adorns the bridge; in fact, the accident revealed the layers of paint to be about two inches thick.

Fortunately, it looks as if no one was injured.  The bridge is likely owned by CSX or possibly the city.  In either case, the University Transit Service would be responsible to pay to have the bridge repaired.  Perhaps the two inch thick layer of paint on Beta Bridge helped make the impact less severe. . .no really.