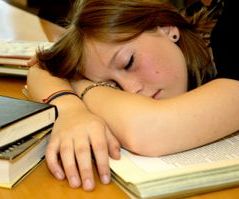 Science Daily reports that biological and social pressures cause sleep patterns to shift towards a later bedtime during adolescence, resulting in fewer hours of total sleep per night. As a result, Virginia teenagers incur a significant sleep debt which increases their drowsiness during the day and can also increase their risk of crashing their vehicles while driving. Unfortunately, school tends to start earlier at around the same time that students start to go to bed later – middle and high school. This early start can impair learning and driving ability in Virginia teens and promotes tardiness.

After the time change, students reported nearly 12-30 minutes more sleep per night on average, resulting in about 45 minutes less catch up sleep needed on the weekends. Fifty percent of students got eight or more hours of sleep on school nights as opposed to 35 percent before the time change. Daytime sleepiness as measured by the Epworth Sleepiness Scale decreased significantly, and performance, as measured by GPA, generally increased. These results were then analyzed for a relationship between a later school start time and county car accident statistics. The extra amount of sleep allowed by later school start times correlated with a significant reduction in the accident rate.

In fact, while the state as a whole saw their accident statistics rise by 7.8 percent over the course of the year, the county-wide district where the study was conducted saw a 16.5 percent reduction in their accident rate over the same time period. This coming from a county where crash rates were notoriously higher than the rest of the state prior to the change in school start times. Phillips attributes the “decrease in auto accidents after the change in school start times to improved vigilance, as the students were able to get more sleep.”

This study was conducted in Kansas; however, teenagers all over the United States are relatively similar. Teenagers in Virginia also experience a “night owl” shift but are expected to be present for early high school start times. With car accidents as the leading cause of death among Virginia teenagers, a 16.5 percent reduction in the accident rate would be significant.